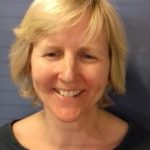 As part of the Science Capital Project, Techniquest are working closely with community organisations, one being Cardiff Institute for the Blind. Jane McCann, CIB’s Community Coordinator, tells us more of their experience at Techniquest.

“I have recently started working for Cardiff Institute for the Blind as the Community Coordinator for Cardiff, where the role is funded by the Big Lottery for the next two and a half years. The role primarily works with service providers within the city to make services more accessible and welcoming for vision impaired people. I’ve also been severely sight impaired since I was 8 and have had a guide dog since just before my first child was born 21 years ago.

Although I have been to Techniquest numerous times when my children were little, I had not really stopped and thought about it from an accessibility point of view. I mostly sat back and enjoyed watching the children engaging with the centre and their Dad would provide all of the explanations. I could not see well enough to read the explanatory information and would just have a quick go to see if I could work out what to do by touch. Of course, I never had long to do this, as the children were quite quickly on to the next thing.

When Kelsey, the Community Engagement Officer for Techniquest told me that Techniquest now do regular adult only sessions such as After Hours, we were invited for a visit to provide feedback on what manageable adjustments could be made. This would help to make the current exhibits easier to use by both children and adults who are Visually Impaired. I jumped at the opportunity to go, along with two other members of CIB and our Guide Dogs.

We went when Techniquest was closed to the public, so it was very easy in terms of mobility with our guide dogs and white canes. We were also able to hear the Apps on our phones which read out the exhibit information and had the ability to describe photos. Apps like Seeing AI, Envision AI, Tap Tap See and Be My Eyes can be very useful in lots of situations to get audio feedback on text and pictures, when there is no audio description, but can be difficult to use in a busy noisy environment. Of course, we will normally be going when it is much busier.

We had great discussions with Techniquest on small changes that could be made to help VI people use the current exhibits independently and ideas they could include in their new exhibition space which will be open to the public in Spring 2020. We also suggested that Kelsey investigate making some changes to the Hub area to make it more engaging and accessible to both VI and non-VI people. This area is being used to display information about the Science Capital Project and gather feedback from all areas of the public about the proposed exciting changes.

It was fantastic to have the opportunity to visit Techniquest and feedback on accessibility issues for VI people. We are looking forward to working in partnership with Techniquest and facilitating numerous visits by VI people of all ages. Anne, one of our members at CIB, was thrilled to hear that we are working together. She said that “When I turned 70, Techniquest was on my bucket list of places to go and with the work of the Science Capital Project and CIB’s input, I will be able to tick this one off.””

Are you a Community Organisation or Individual? Connect with us at Techniquest, please contact us at info@techniquest.org.