Techniquest is a recognised, unique waterside venue in the heart of Cardiff Bay and provides a perfect space to hold meetings and parties alike.

What were the aims for the event?

The Forte Project got in touch with us to host a secret pop up music event in association with the Cardiff Bay Eisteddfod.

This year the Eisteddfod takes place in Cardiff Bay, opening its doors free of charge for the very first time to encourage non-welsh speakers to engage with the celebrations. As part of Eisteddfod, there is a team called Shwsh hosting a number of pop up gigs in secret locations all over Cardiff. They wanted to source unique, well-known venues with easy access to Mermaid Quay for acts to perform their original music in front of a live audience.

The Forte Project chose Techniquest as they wanted a family friendly venue near the bay that could accommodate an exciting 2-hour set.

How did Techniquest deliver the event?

Techniquest has a Science Theatre which was perfect for this particular event, it has a capacity of up to 85 adults and the acoustics are great, making it an ideal space to host a music gig. The recent venue upgrades also meant the seating was perfect for a long music set as back rests have been recently installed.

With extended opening hours across the Eisteddfod, staying open until 19:00, the live music performances ran between 17:00 – 19:00 allowing invited guests and Techniquest visitors to take in the show.

Techniquest’s entrance was sign posted with #SHWSH posters to direct guests to the Science Theatre. 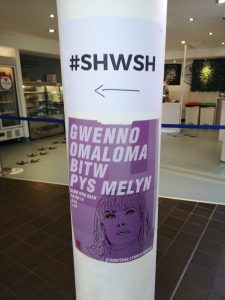 The challenges and how we overcame them.

The Forte Project required the theatre between 17:00 – 19:00 for the gig itself but needed time to set up and sound check beforehand. Operation Earth, Techniquest’s Summer Science Theatre show was running at hour intervals throughout the day. To get around this, the technical team were given access to set up during the breaks throughout the day.

The AV suppliers arrived earlier in the day and loaded their equipment into The Lab. In-between shows, they set up various lighting and sound equipment including uplighters and PA systems in preparation for full access at 16:00. At 16:00, they completed set up whilst the Techniquest events team ensured the space was spotless. Sound checks were then completed ready for guest arrival at 17:00. 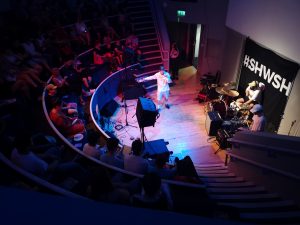 What was the outcome of the event?

The event was a great success, with the Science Theatre full of invited guests! The AV team packed down in super quick time and was clear of the venue just 20 minutes after the event finished. The client from The Forte Project said:

“The venue and staff including the Event Manager at Techniquest were fantastic in the face of an unusual time-sensitive event, providing myself, the technical staff and promotional staff a brilliant space to work in and a really helpful response to our needs.

All of the understandable limitations of putting on an event in an active museum were made clear to us from the beginning and gave us a clear plan to work to from the offset. Despite these limitations you did all you could to make our experience at Techniquest as easy as possible to work in. Our audience was impressed with the ability for the venue to double up as a music space and the setting was perfect for the unusual event” 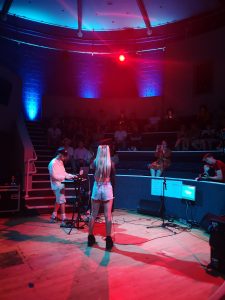 For more information on holding an event at Techniquest, please contact us at events@techniquest.org or on 029 2047 5475.