A community project focusing on the photography of STEM-inspired people has been unveiled during a ceremony at Cardiff-Bay based Techniquest. 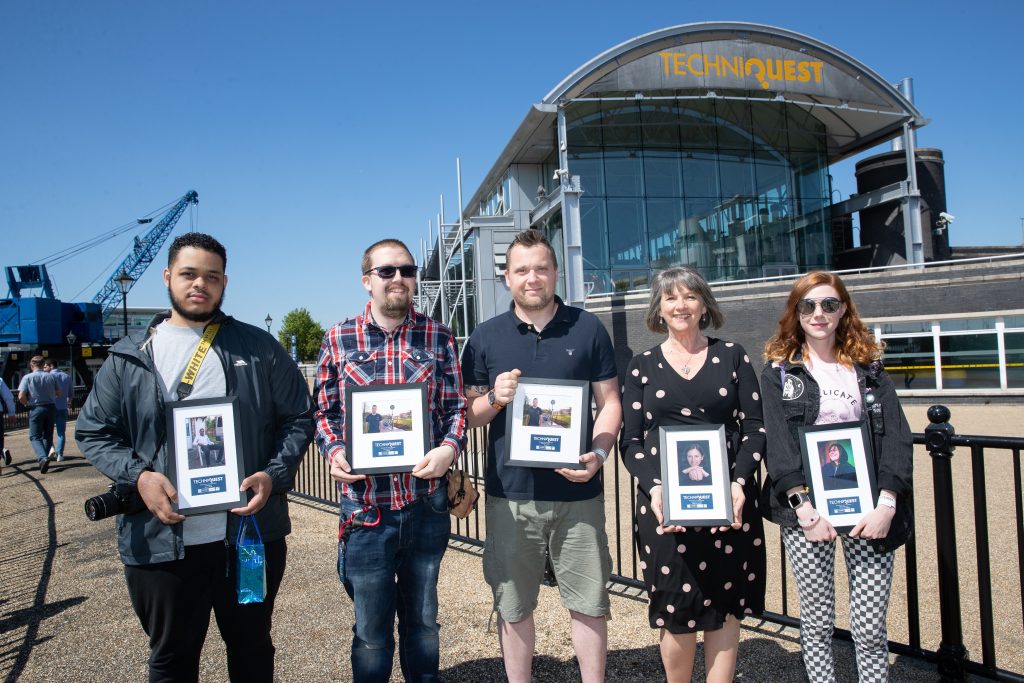 Sponsored by HLM Architects, Wardell Armstrong and Hydrock along with partners Repair Café Wales and Radio Platfform, the project was open to all amateur photographers within the Cardiff area. Six individuals have had their work hung up and displayed within the science centre’s Community Space area.

The brief was simple; capture an image or portrait of someone you know with an interest or background in STEM.

Lesley Kirkpatrick, CEO of Techniquest said: “I was absolutely blown away by the calibre and diversity of images we received following our call for photographs. All seven individuals captured the essence of what we wanted to achieve perfectly and did so in their own creative way.

“Our aim at Techniquest is to open the door of science to all walks of life and we understand the power that art can have within the wider context of society. We felt it was only appropriate to incorporate art into STEM to create STEAM in order to demonstrate the beauty and creativity of the sector. I’m looking forward to seeing how else we can use art to reach more people in the future.”

Photographer Chloe Wakeham is a resident of Cardiff and has a background in Psychology and MSc in Clinical Psychology, with a hopeful PhD in Sociology soon. She’s often found playing guitar, writing a blog inspired by mental health issues and LGBTQ+ topics, as well as having fun with film photography.

She said: “The Cardiff Community is quaint and quirky which is why I love being a part of it so much. It’s imperative to support the people and projects that help colour our city. Cardiff will continue to grow and expand in diversity and I’m excited to witness this.

“I wanted to photograph Nik (Nikoleta Glynatsi) because she’s an up and coming international PhD student in the mathematical world. As a queer woman in STEM, she belongs to a group who are underrepresented and don’t always get the recognition they deserve as researchers.”

Meri Suttle photographed Errol James. Born in Jamaica, Errol came to Cardiff in 1973 as a small child, with his parents and brother. Cardiff is home to Errol, and he completed his electrical engineering apprenticeship in the local area. Errol has a keen interest in golf and classical guitar, but his true passion came from his faith, which gave him the opportunity to meet and work with youth groups, and eventually set up sponsored youth clubs. The opportunity for Errol to become a Trustee at Techniquest in 2019 combined his passion for youth and community work, with his experience in STEM as an electrical engineer.

Meri also chose to photograph Tony Thompson. With a higher education diploma in Criminology and Forensic Science, it was a natural route for Tony to work in STEM engagement, as a Science Communicator at Techniquest for the past five years.

As a representative of someone in STEM, Tony enjoys the classical methods of science communication but the “Techniquest style” of incorporating a sense of humour and approachable manner to his shows, whilst also ensuring they’re leaning heavily on education.

He said: “My personality is expressed most in the theatre – with my goal to not only educated young people but to get a laugh from parents. STEM should be inclusive for everyone.”

Jackie Anne Fanthom isn’t originally from the Cardiff community but very much feels part of it now that she lives in Whitchurch.

Jackie said: “Eirini Messaritaki was born in Greece and works at CUBRIC. Little is known about the brain, so it is wonderful to have a new state of the art brain imaging centre here in our city with scientists like Eirini working to help those who are affected by diseases within their brain. I wanted Eirini’s face and the brain to be highlighted against a dark background for a strong, dramatic image and represent Eirini’s field of science.”

Photograph subject Eirini said: “ I love the fact that Wales has a unique identity, with its own history and language. When Jackie first asked me about this project, I was extremely honoured! I hope to convey the message that science is for everyone as so many groups in our communities are under-represented in STEM. Neuroscience and brain imaging aim to understand the brain and how it functions, and these goals motivate me on a daily basis.”

Peter Evans photographed the Community Gateway Engagement team which aims to make Grangetown an even better place to live and work by creating university and community partnerships by building long-term partnerships with residents. The partnerships help to bring community-led ideas to life, with the launch of over 48 projects so far. Their aim is to invest in nine social, environmental or economic themes chosen by the communities of Grangetown.

They are currently building links to STEM through their ‘Grangetown Greener’ project. This will establish partnerships with local area schools to give children access to a safe green space for learning, as well as directly enable the growth of a community garden.

Richard Camilleri runs Escape the Cape Photography, a local, family run business. Richard has Asperger’s Syndrome and says he uses his “over-active mind” to immerse himself in taking photos other people might not think of.

Richard said: “I chose to photograph Dan Davis as he’s not only an engineer but recycles and refurbishes bikes. He prevents them from going to landfill and contributing to the pollution in the world.”

Richard’s creativity led him to Photoshop his image, choosing a background which represents solar and pedal power. These energy sources will create new careers in STEM industry and innovation.

Owess Munir was a ‘true humanitarian’ and the regional community fundraiser for Islamic Relief in Wales and the West. He was incredibly respected and very well known within the local community and hugely missed by photographer, Zaid Djerdi. Owess passed away in September 2018 and Zaid wants Owess’ memory to live on by highlighting his fundraising, maths skills and his innate desire to help people.

Zaid said: “He was a brother to me and brought the youth together always. We toured up and down the country helping raise money for people who needed it the most. People will never understand the amount of joy we created. I know his family would love the photo I took when we were in France last year included in the gallery.”

The winning photographs are now displayed within Techniquest, Cardiff Bay.